By Josh Collins. Josh is one of the many Soldiers and Families that Task Force Dagger Foundation has assisted and who we support. Please take a moment and read this article. I know that it will move you as it did me.


When I think of the men I’ve served and worked with over the past 26 years, I call them heroes, and I always felt as if I had to be sprinting as fast as I could all the time just to keep up.  I still feel as if I owe them everything.

The Task Force Dagger Foundation was there for my family during the darkest hours of my life.  We received immediate needs intervention, continued SOF health support, and most recently, almost a year after leaving the VA hospital in Tampa, FL, a recreational therapy event at Dagger Dive 2015.  Now, though there are still some medical diagnoses to overcome, life has never been so good, and Tonia and I face each day with a renewed hope, and healthy outlook.

By Mid-April 2014, my life had become a complete wreck. I retired from the Army in December 2008 after 20 years of service, and all but a few of those in the SOF community as both an enlisted Operator and Infantry Officer. 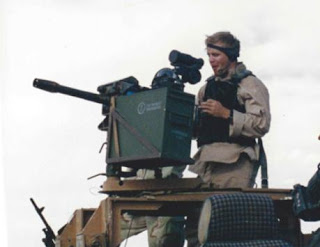 Six years later, after numerous government Contract jobs, the many Traumatic Brain Injuries (a total of 7 with LOC), the PTSD, the prescription meds, and lots of alcohol finally caught up with me.  I was confused, suicidal, and hurting.  I only ever survived each day.  Whether because I found a reason in my family to keep living, or by fate or divine intervention the accidents were avoided and I was never stopped by a police officer while I was, “Patrolling” at night.  It all came to a head when some members of my former Unit, my wife, and the SOCOM Care Coalition put their foot down to stop the recklessness, and I was admitted to the Polytrauma Unit at the James A Haley VA Hospital in Tampa, FL on 5 May 2014.  This is the first time TF Dagger came to our aid, flying Tonia down on several occasions to manage the 3 month hospitalization.

It all culminated after another severe concussion at work while teaching combatives, and a second concussion worse than the first just a month later due to a fall.  At that point, I completely lost my balance in life and fell off the tracks.  I was drinking at least a bottle of alcohol a day, and alongside many prescription meds with the most serious precaution labels.  Everything seemed cognitively dissonant when I landed in the VA Hospital in Tampa.  I had immediate trouble understanding why I was there, or even how I landed there.  I just shook my head as I stared at the mostly older war and trauma torn veterans, most from Vietnam, and some from OEF and OIF.  I arrogantly thought to myself, “This isn’t me.”  But as I began to sober up, and was taken off some of the harder prescription meds, I finally began to see a different man in the mirror.

At the two week point, and after spending all of the first week in the Telemetry Unit to monitor for seizures, I looked around in disbelief.  At 45, I found myself in a Veteran’s hospital.  All my injuries, wounds, scars, and pain now came to the surface.  Also, the damage I had done along the way to my family and friends seemed to reach out like hands from a grave.  Then, memories I had suppressed and had, “Compartmentalized” for years opened up like ugly case files that had only been stored in order to destroy one day.  Problem is, there isn’t a magnetic eraser for these kind of hard drive files.  I was now one of the vets that I was previously looking at so sympathetically, and I needed help.

I have spoken with many friends and other soldiers who have had a TBI, and who are in search of answers.  No pun intended, but it’s all very confusing, and mostly because we know so little about the human brain that attempting to diagnose and treat it is almost laughable.  For any out there struggling through the bog of doctors opinions, you know it is a long road, but I believe I am finally getting some real answers, and also some real compensatory strategies other than a PDA device for writing things down, but which I’ll lose or forget to check what needs remembering.  A PDA doesn’t help when you are lost inside a building, can’t find your car in a parking lot because you can’t remember what car you drove, or your extended families names at Xmas.  Sometimes every day can seem like a scene from, “Groundhog Day”, or “Thirty 1st Dates” in that I have very little running memory of the past.  A game that my wife Tonia and I play often is in reviewing even the seemingly simple things like what we had for dinner the previous night, or where we went during the day, etc….

I believe it’s important to know where you’ve been in order to figure a path forward.  Simply put, (an oxymoron) I have a complex “Neuro Cognitive Disorder” as a result of numerous traumatic brain injuries and loss of consciousness concussions; 4 from blast, 2 parachute landing falls, 2 blunt trauma accidents, and 1 amateur boxing match.  For me specifically, then there is the repetitive blows from 50 amateur and 36 professional boxing, kickboxing, and MMA fights, and as well as all the associated sparring through the years.  I tried to tally the collective damage with so many years fighting, and also almost 2 decades of exposure to close proximity explosive blast.  All said, I tallied the number of head blows at well over 100,000, and close charge exposures of at least 10,000.  Prior to 2014, I had been diagnosed with several sorts of brain related illnesses like Dementia Pugilistica, Pugilistic Parkinsonism, and even Chronic Traumatic Encephalopathy or, general brain damage as is the case for NFL football players and boxers with repetitive concussions.  I also have the unwanted PTSD, and that is what gets really discombobulated.  It’s sort of like trying to figure out how to fix a skipping record when there is a broken needle on the record player.  Is the record scratched, or is the record player damaged?  In a human case, is it the traumatic stress, or the damaged brain??

With regard to traumatic stressors, I may understand now the totality of the predicament I found myself in, and aside from cognitive difficulties.  In the past, I didn’t recognize how certain events in combat were in fact awful, and that I should have some thoughts and emotion about them.  Or, that major life stressors as an adult, like the loss of a wife cannot be compartmentalized away.  And, that some of those things we set aside as kids and never speak of again might one day return as a contributing factor.  If your habit is shoving every bad thing in your life into a stuff sack, well, eventually it bursts.  Further, if you pour alcohol on that bag then it may burst in flames!

So, moving forward from here.  This Spring I made contact with Dr. Ann McKee, Professor at Boston University and who is the Director of the Neuropathology Core.  In the email subject line I wrote, “Great brain to donate - US Army Delta Force Operator”.   Dr. McKee discovered Chronic Traumatic Encephalopathy (CTE) and is probably best remembered as the Neurologist who testified before Congress in 2009 and again in 2011 on the significance of CTE, or general brain damage found in the deceased brains of many retired NFL football players.  The list of aging players who had otherwise been educated family men but slowly turning to drugs, alcohol, and bizarre behavior before ending their lives was steadily increasing.  National research was needed and Congress took action.

Dr. McGee responded to the email I sent her which outlined my dilemma.  She has put me in contact with other providers who can assist, and who are on the cutting edge of brain related disorders.  In return I have agreed to donate my brain, and Chris Nowinski, Director of the Sports Legacy Institute is assisting with all that…..But they’ll have to wait a while before they get to put my brain in a pickle jar.

The road to recovery has been paved with hurdles, but nothing like what we overcame just over a year ago.  The support of TF Dagger has been simply amazing, and lifesaving in fact.  In April of this year they sent us to the Brain Treatment Center in Newport Beach, CA, where I believe I progressed a decade out of TBI related symptoms.  Life took on a new glow, and the groundbreaking Magnetic Resonance Therapy treatment has had significant and lasting effects.

I have never stopped working hard to fix any problems that arise from these medical diagnoses, or from the requisite meds that are now effectively monitored by a great medical team and my wife.  TBI and the related diagnoses have daily effects in my life, and I strive to overcome with new mental challenges, complex puzzles, languages, and the arts.  I feel sometimes as if things are normal, but then right up until I wind up in the ER due to a seizure.  I’m still searching for better clarifications to understand my own brain, and for greater ways to overcome the associated problems, but mostly to just improve quality of life.  I’ve never accepted that I should just take my meds, relax, and live.

I refuse to believe that brain illness or disorders automatically continue to worsen with age.  Too many of our elderly prove this wrong by staying sharp well into their 80’s and 90’s.  My grandmother is 103 and still writes us beautiful handwritten letters, and to all her great grandchildren also.  What is the difference with learning as a child, reviving and recovering from a TBI created coma, or continuing to learn and achieve after multiple TBI’s.  I will continue to believe this; the brain is a muscle and can be exercised back to health.  I also realize that there are some conditions that are permanent, and we will have to take those things in stride.

Aside from working the mind, I have stopped drinking alcohol, and I believe this has been the greatest contributor to a healthy recovery.  I was making it nearly impossible for the doctors to help me with a diagnosis and treatment plan while I was self-medicating daily and to such an extreme.  Now I believe this is the most significant thing a Veteran can do for themselves.  It is also the hardest.  It is damn hard given our culture.

Life is too short.  I want to give back, and I believe I’m in a unique position to do just that now.  In the past 6 months I’ve had a second neck surgery fusing C5-C7, and this week my left rotator cuff was repaired.  The neck surgery took the pressure off my spinal cord and relieved some pain, but better than that, I am no longer falling often and the world moving around me (as badly) all the time (Vertigo 24/7).  I’ve begun to write habitually, and hope to write something that will help my friends, family, and military compadres.  I’m also hoping to give back in some way as we owe such a debt of gratitude and service to our comrades at TF Dagger, and the SOCOM Care Coalition.  I think the next project for Tonia and I will be a lifelong one.  I have found my new mission, and this will be our longest voyage I spoke of at the start…..Veteran Voyage 360. 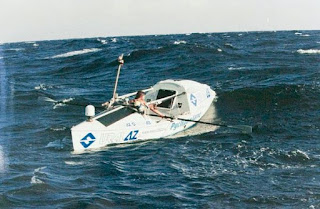 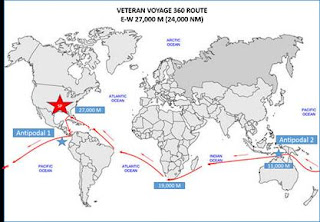 Thank you TF Dagger, and the donors and contributors who are behind the scenes.  And thank you to the SOCOM Care Coalition also, for all that you guys do!